August 15, 2016
It's hard to believe that it's already been more than two weeks since Realm Makers 2016 ended. It's been a hectic two weeks as well. With the kids starting school and catching up on the back-log at work, my writing hasn't jumped forward quite as quickly as I had hoped. I know a big part of that was because of my "writing space", also known as that pile of junk in the corner.

Yep, overly cluttered and surrounded by distractions! It also didn't help that our TV was about two feet to my left, which made it hard to focus when anyone else was playing games or watching shows on it, even if I had my headphones on.  Obviously time for a change.

So I packed up the boardgames taking up the shelf-space and shifted my desk so I'd be facing away from the TV.  It's also nice to have some clear space on the desktop now to use for notes or sketching. 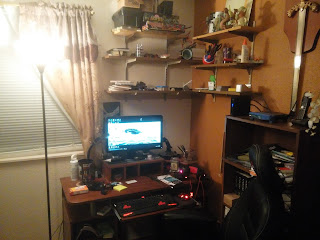 It's still a work in progress, I need to organize the shelves and bring back in some writing documents and sketch books. But it feels much better now. I've just got to keep disciplined to make sure I don't just junk it up again. :)

2. What are YOU waiting for? - Signifying the futility of self-reliance. We stick to our pride and resist putting our lives in God'…
Read more

A big piece of writing advice is to start your story off in the action! Grab your readers by the throat and don’t let them go! I didn’t really follow that advice. Instead I wanted to start planting questions in the reader’s mind. Make them as curious about the world as they were about who this strange Yanguch named Rathe was.
Apart from all the craziness of an alien storm with exploding plants, I wanted to plant the seed of the Saurians being something of a cursed race by touching on Rathe & Rakjear’s reaction to the s…
Read more