Showing posts from 2013
Show all

March 19, 2013
The first scene in Starfire is one of the places in the novel that was re-written the most. I had a lot of information to convey about Rathe and the world he inhabited all while trying to set the tone for things to come. The original opening line of this scene was a highly clichéd “A storm was brewing.” Not exactly attention grabbing, eh? But it was a good reminder to me that I wanted this opening scene to begin laying the foundation for so many things yet to come. A big piece of writing advice is to start your story off in the action! Grab your readers by the throat and don’t let them go! I didn’t really follow that advice. Instead I wanted to start planting questions in the reader’s mind. Make them as curious about the world as they were about who this strange Yanguch named Rathe was. Apart from all the craziness of an alien storm with exploding plants, I wanted to plant the seed of the Saurians being something of a cursed race by touching on Rathe & Rakjear’s reaction
1 comment
Read more

February 14, 2013
Starfire didn't originally have a prologue. I had planned to start it right off in chapter one with Rathe standing on the transport ship and let all of the world & motivations be unveiled from there. However, as a side project during the writing of the novel, I took some time to write a short story looking into the key event from Rathe's past where he first gets the jerkrenak fang. The short story was mainly a way for me to see how the events happened and lay out some groundwork for understanding Rathe's feelings about the event. Eventually though I decided that the story was quite integral to the novel and to letting people get an early understanding of Rathe's motivations and so I merged it into the story as the prologue. Adding the prologue did create some big changes in the story as I wrote. For instance, I never really intended for the wounded hatchling to play any real kind of role in the main story. But when Rathe entered the merchant's shop and the B
Post a Comment
Read more

Galactic Lore - Starfire - The Mending: Book 1 That's quite a mouthful for a title, and has raised some questions as to what the "real' title of the book is from time to time. But maybe that's because the title took a circuitous route to being created. And in honor of that I'll start in the middle. Starfire, the official title for this book wasn't it's first. During the earliest days of brainstorming and story discovery it was simply "Rathe's Tale". Mostly because I didn't know what the Macguffin for his journey would be. I knew I wanted it to be an object of power. But when I finally settled on the Starfire as the ultimate goal, the end title was just a no-brainer. Sure it doesn't imediately bring visions of weapon wielding dinosaurs to mind, but it does have a good air of adventure and science fiction goodness. With Starfire taking over the main title spot, Rathe's Tale fell to being the series header for a long time.
Post a Comment
Read more 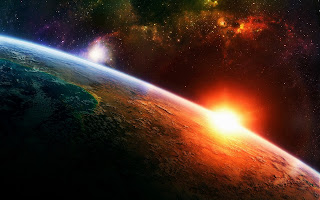 In just a few short months, it is going to be four years since my novel Starfire was published. I could chase away the few who stumble across this once-abandoned locale with a litany of excuses as to why the sequel has not yet materialized. Let’s suffice it to say that I simply have not been the writer I should have been and that the fires that forged Starfire had been neglected as I cared for the needs of my fledgling family and adjusted to being a husband and father, seeking out “easier” distractions than crafting alien cultures. Much to the detriment to those fans who charged into the fight with Rathe and were enchanted by the strange innocence of Karey Or. I apologize to all of you that it is taking so long to continue the adventure, but I am beginning this series as a way to ensure that your wait will not go unrewarded. Over the next many days I will be revisiting Starfire by posting behind the scenes thoughts and stories about the scenes and characters from the novel. As much
1 comment
Read more
More posts